Founder members such as Ernie Knew, Clifford Allen, Henry Westron and Dudley Hallwood meet at the Fleur de Lys in Canterbury High Street to discuss the formation of a rugby club. They write letters to the press with an excellent response. This leads to well attended meetings, practice matches and the creation of the club. 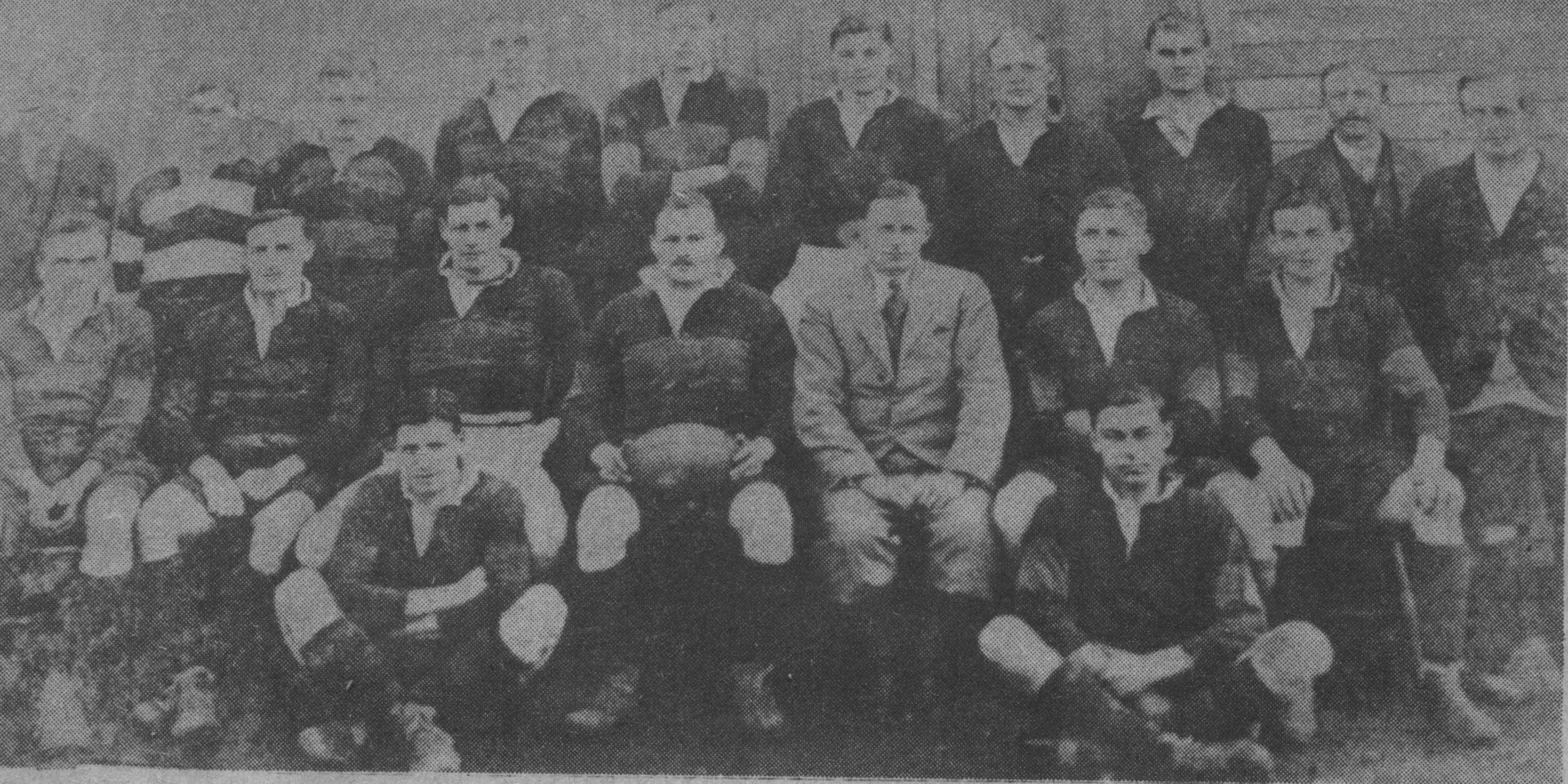 The first match is held at Jackey Baker’s Sports Ground in Ramsgate. The Canterbury captain is Dudley Hallwood, a speedy threequarter. They lose to a well established Thanet team. Hallwood moves jobs mid-season and is replaced by Clifford Allen. 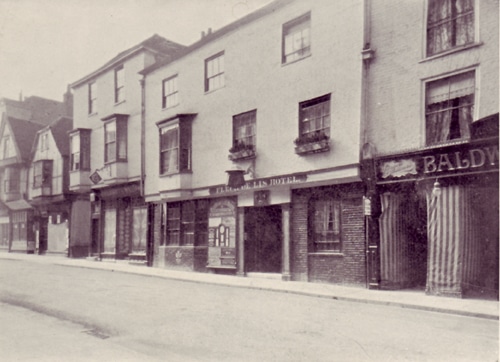 The club regularly field two Saturday sides as well as a mid-week, Thursday, team The home matches are played on a ground in the New Dover Road ground – this is now the Barton Estate. Success on the field does not come easily and there are just two winning seasons under captains Francis Gilder and Will Simpson. Scrum half, Ernie Knew, becomes the first Canterbury player to represent Kent.

The HQ is the Royal Fountain Hotel in St Margaret’s Street, where there are changing rooms, baths and hospitality.

In July 1937, the club gets its own ground when president Stephen Williamson, owner of the St Mildred’s Tannery, buys the Merton Lane ground and rents the eleven acres to the club. This major step is celebrated in October 1937, when there is a match between C G Williamson’s Blackheath XV and Canterbury. The club has a pitch but there are no facilities there except a small hut. 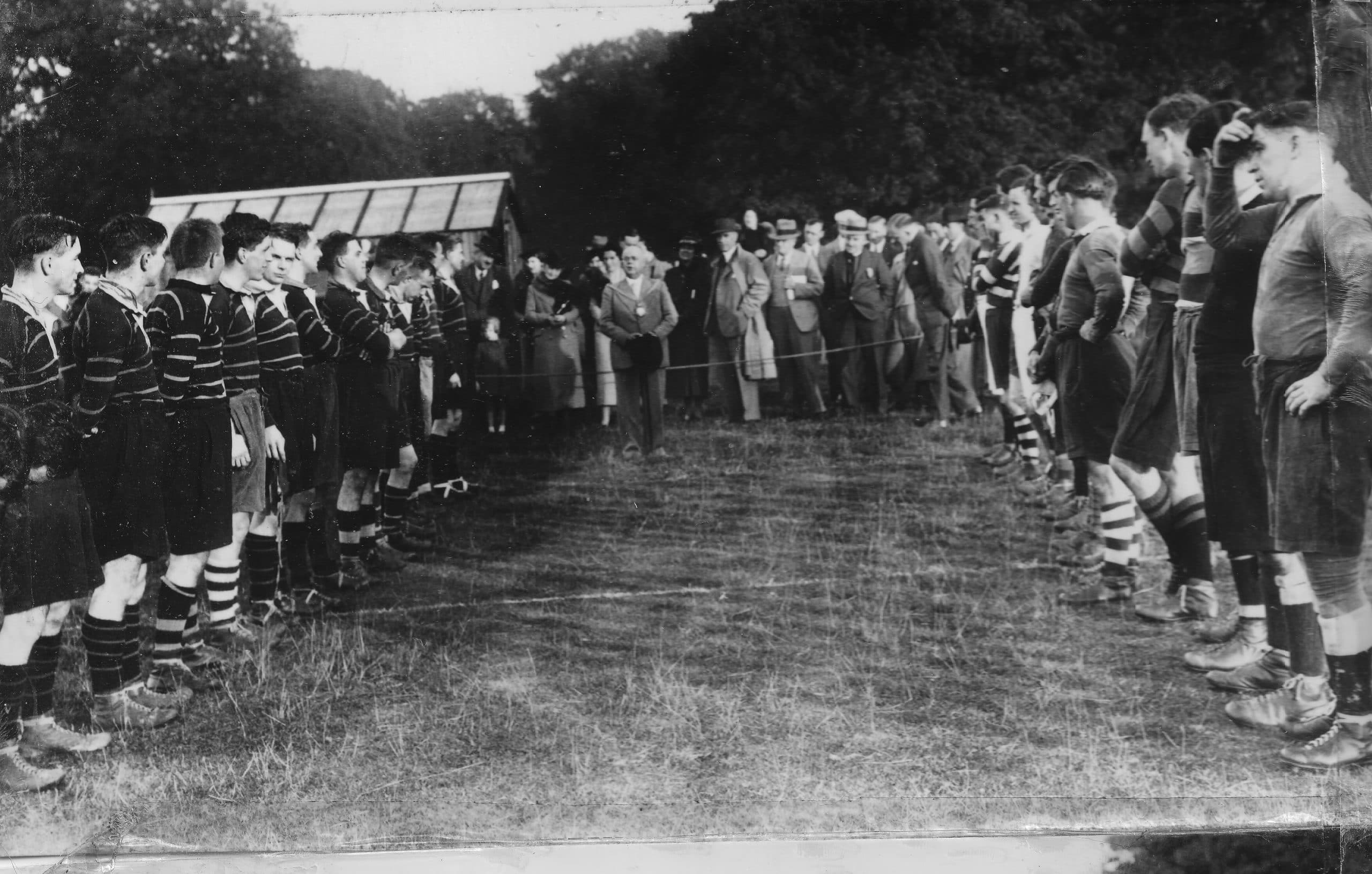 Many Kent clubs go into abeyance during the war but chairman Henry Westron and captain Will Simpson are determined that the club should keep playing. Farmers Jack Hirst and Strib Helbling keep the club operating, helped out by local military personnel and with matches, often against military units. Part of the ground is let out to other sports such as cricket or to grazing and growing crops. 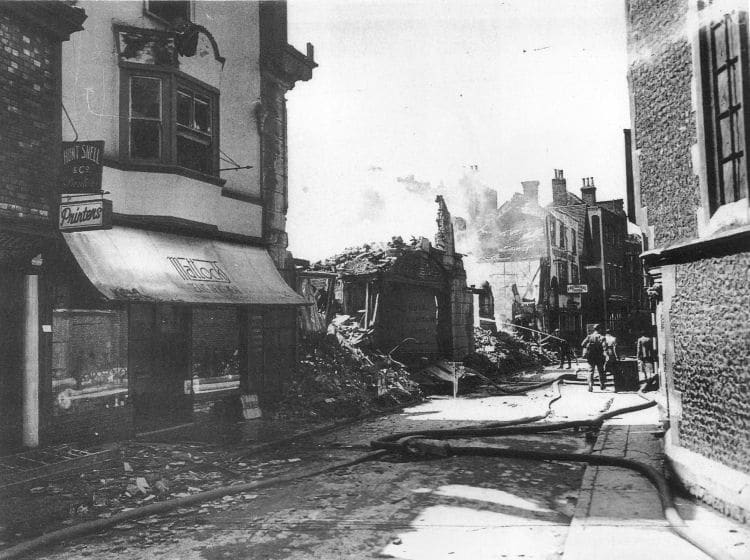 In 1946, the founder-president, Stephen Williamson, resigns and Gabriel Hews, owner-editor of the Kentish Gazette becomes president.

In July 1947, brothers Philip and Thomas Wacher buy the Merton Lane ground. In December they buy more land to the south where the club now has its second pitch. The Wachers lease the land to the club on favourable terms. 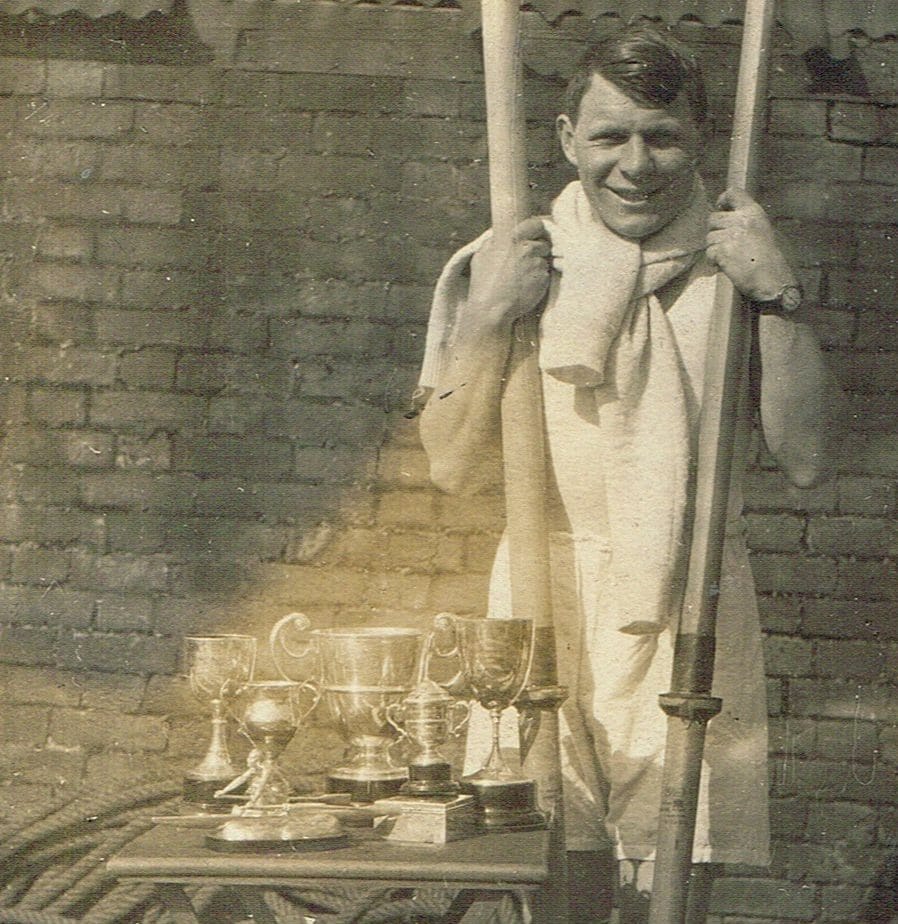 In May 1953, the club begins to build its first pavilion, overseen by Martin Osborne, who becomes honorary secretary for over twenty years. On December 10th 1954, the new pavilion is opened by Gabriel Hews.

On the field, the club develops into one of the strongest clubs in East Kent with winning seasons under skippers, Hugh Kelsey, followed by Kent cricketer, Geoff Smith, Australian Adrian Kent and David Parker. Parker would be regularly selected as a centre for Kent over several seasons. 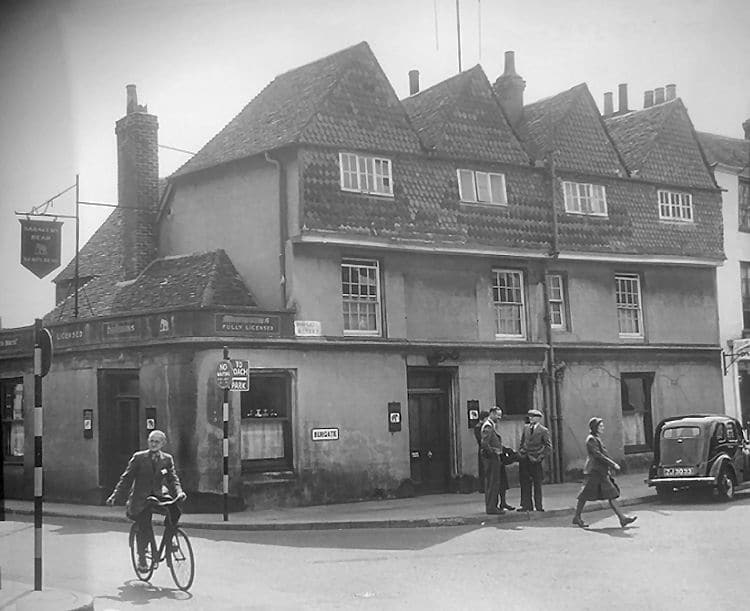 The playing success continued under captains such as Eddie Hardy, Ken Phillips and Mike Roberts. It was an era in which the Sevens team blossomed, with frequent wins at Dover as well.  The creation of a further pitch meant that the club were able to run its own tournament. The additional pitch was essential as the club were able to field five sides by the end of the decade

Tony Redsell became chairman in 1967, forming an invaluable partnership with secretary David Hallwood that would see major changes in the club. 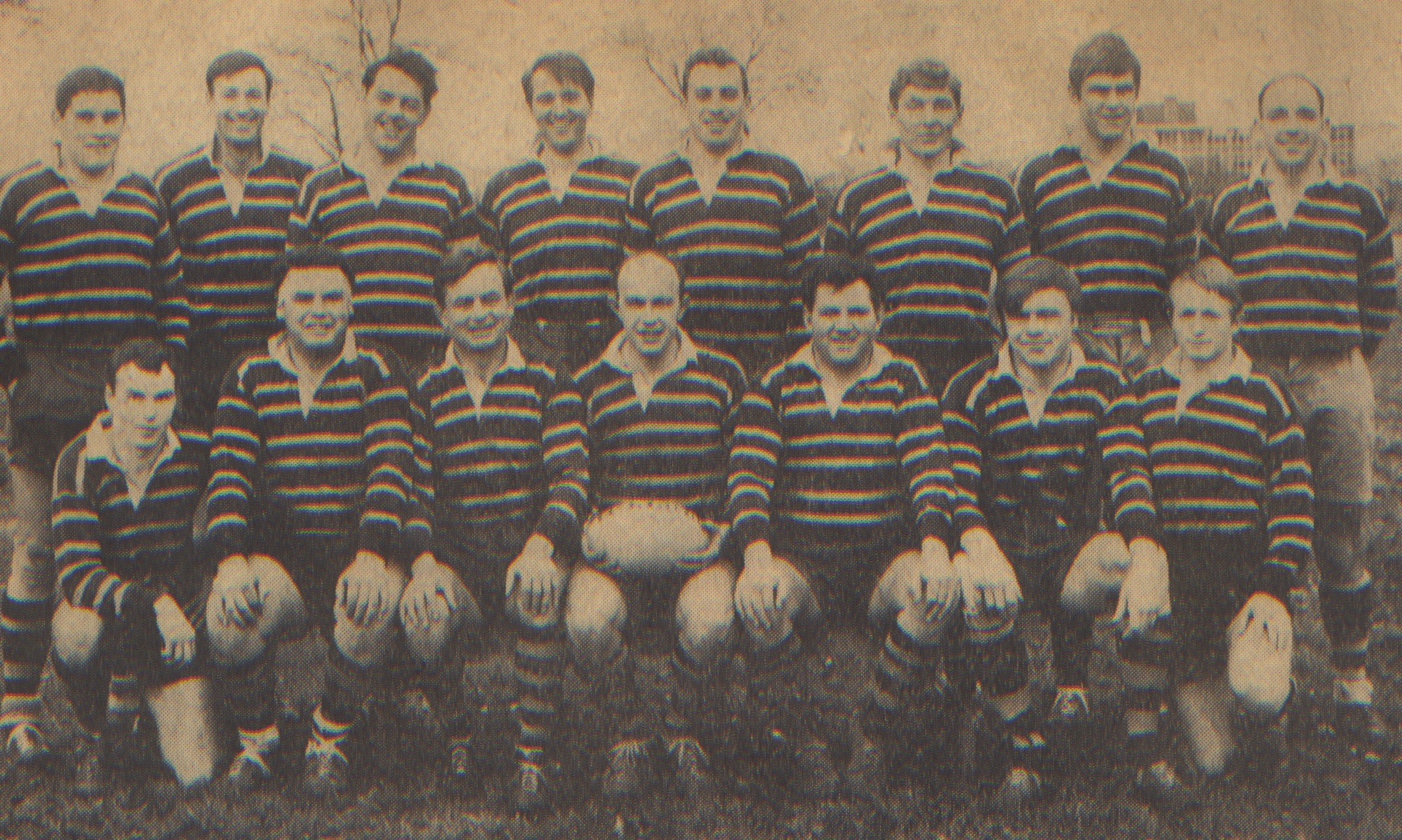 The early 1970s were some disappointing results on the field but the club bounced back. Several talented players arrived, notably Mike Nurton, Grame Lockhart, Gordon Seggar, Mike Tarbit and Kiwi, Peter Clotworthy. This group, coached by Terry Grayson and under the captaincy of Barry Jackson, lifted the Kent Cup in 1975, undoubtedly the highlight of the club’s first fifty years.

Off the field, there was a major extension to the pavilion in 1972, which was celebrated with a match against a side led by England skipper, Budge Rogers XV.

Alongside this, there was the installation of floodlights for training

Towards the end of the 1970s, there was upheaval caused by the Canterbury bypass which required turning the top pitch, moving power lines, water meters, fences, the installation of a safety screen with trees between the new pitch and the road and the building of a new concrete access road.

1979 was  50th jubilee season, which included a dinner at the Westgate Hall and a jubilee match that reunited the Kent Cup winning side, playing the current 1st XV. 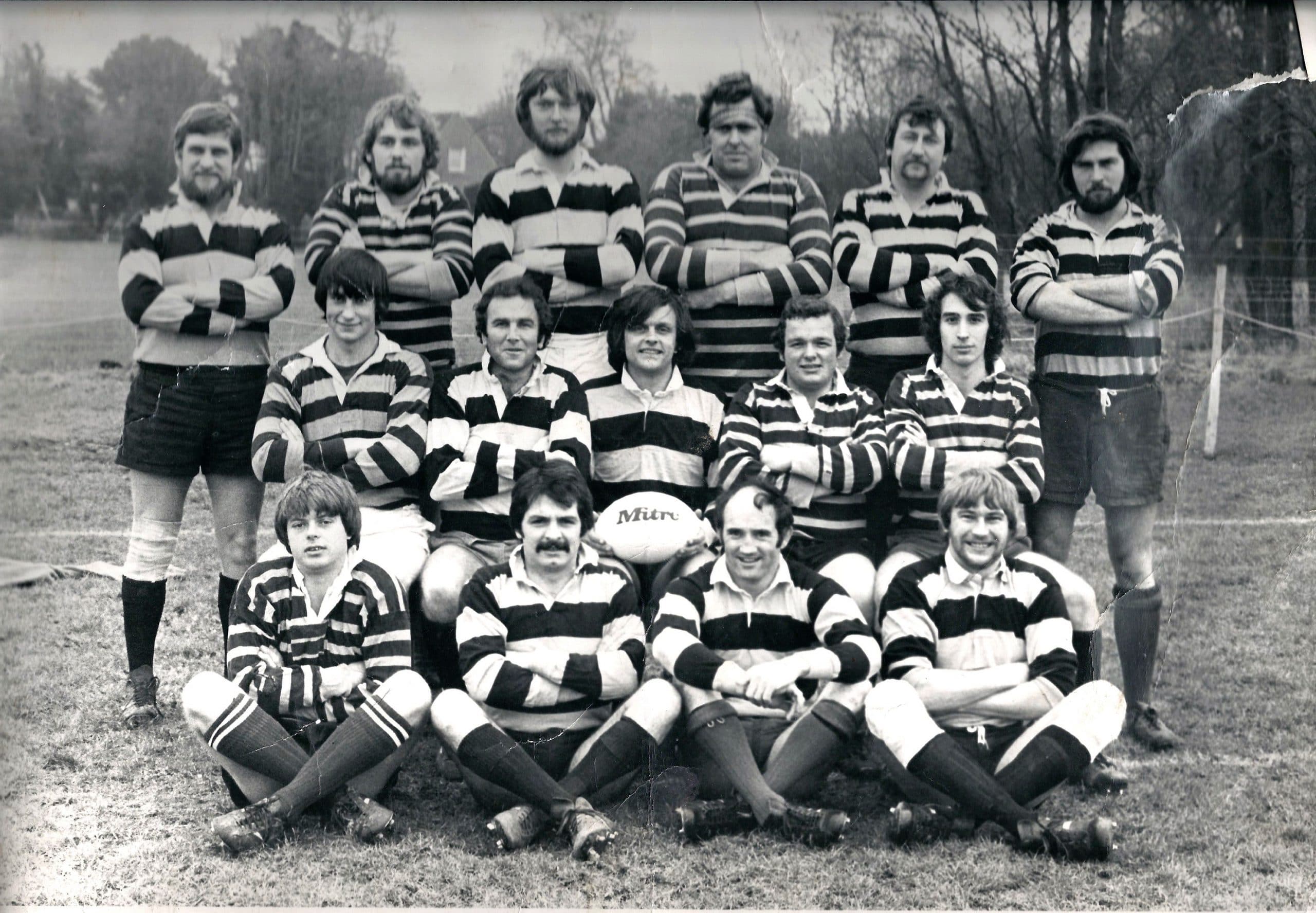 This period marked a sea change in the game for every club when RFU official leagues were introduced in 1987. Earlier in the decade the club took a bold step by launching Kent’s first floodlit competition which quickly proved a major success with East Kent teams but adapting to the league system proved difficult. Canterbury were placed in the London South East Division and relegated in the first season, starting a decline which continued for four seasons.

At the start of the 1990s the team was playing at its lowest point in Kent Division 2  but from that unpromising position a revival was born. Throughout the next ten years the first team climbed steadily up the league ladder and made it their ambition to be a London Division One club by the millennium. They would have achieved that goal had it not been for the administrators.

Having won the London 2 South championship in 1999/2000 they were told there was no promotion because of re-organization of the leagues. The upsurge in fortunes had been achieved through better recruitment policies, properly organised coaching and increased sponsorship. In addition there was an expansion of the strong and successful Junior and Min Rugby sections which were to produce many fine players.  One of them was Andy Pratt who went on to make a record 26 appearances for the Kent County Championship side.

In this period, too, Leon White became the first of four Canterbury players to captain Kent. Leon was subsequently followed by Andy Pratt, Matt Pinnick and Jamie Forsyth. The club also broadened its commitment to the community game by the introduction of a Womens team. 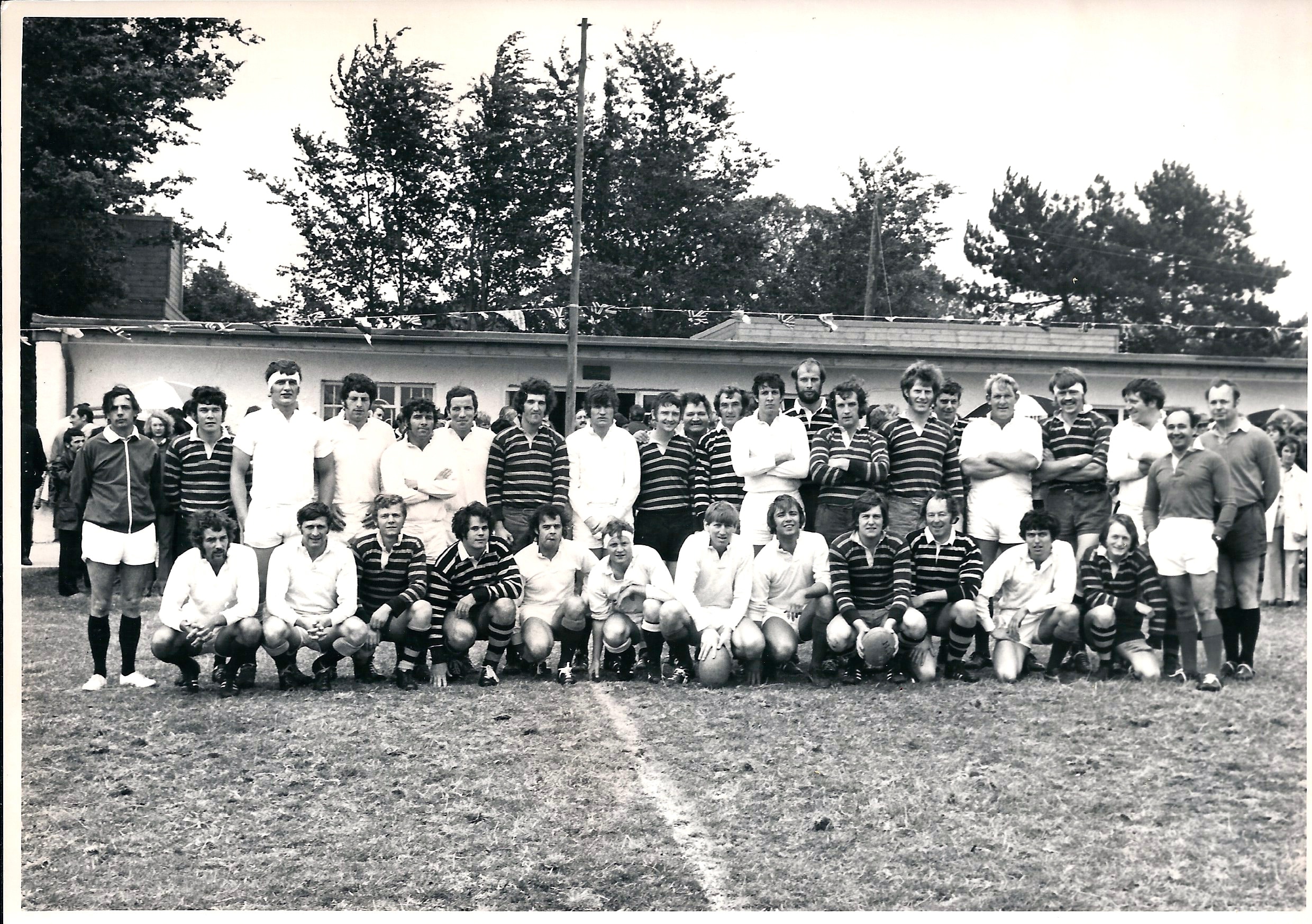 In 2002 came consolation for the disappointment of two years earlier as promotion was won to London Division One.  This heralded one of the finest decades in Canterbury’s history. In 2006 they were promoted to the National Divisions and won the Kent Cup in four consecutive seasons, 2005 to 2008, beating Blackheath three times and Westcombe Park once.

There was a tentative start to the first venture into National League rugby but the team exceeded all expectations by ending 2006/07 in fourth position in National 3 South. The demands of the higher league, which subsequently became National 2 South, increased every season but Canterbury responded to the challenge and were consistently in the top half of the table. In what was now a semi-professional era this was an exceptional effort when competing against many clubs with heavy financial backing. 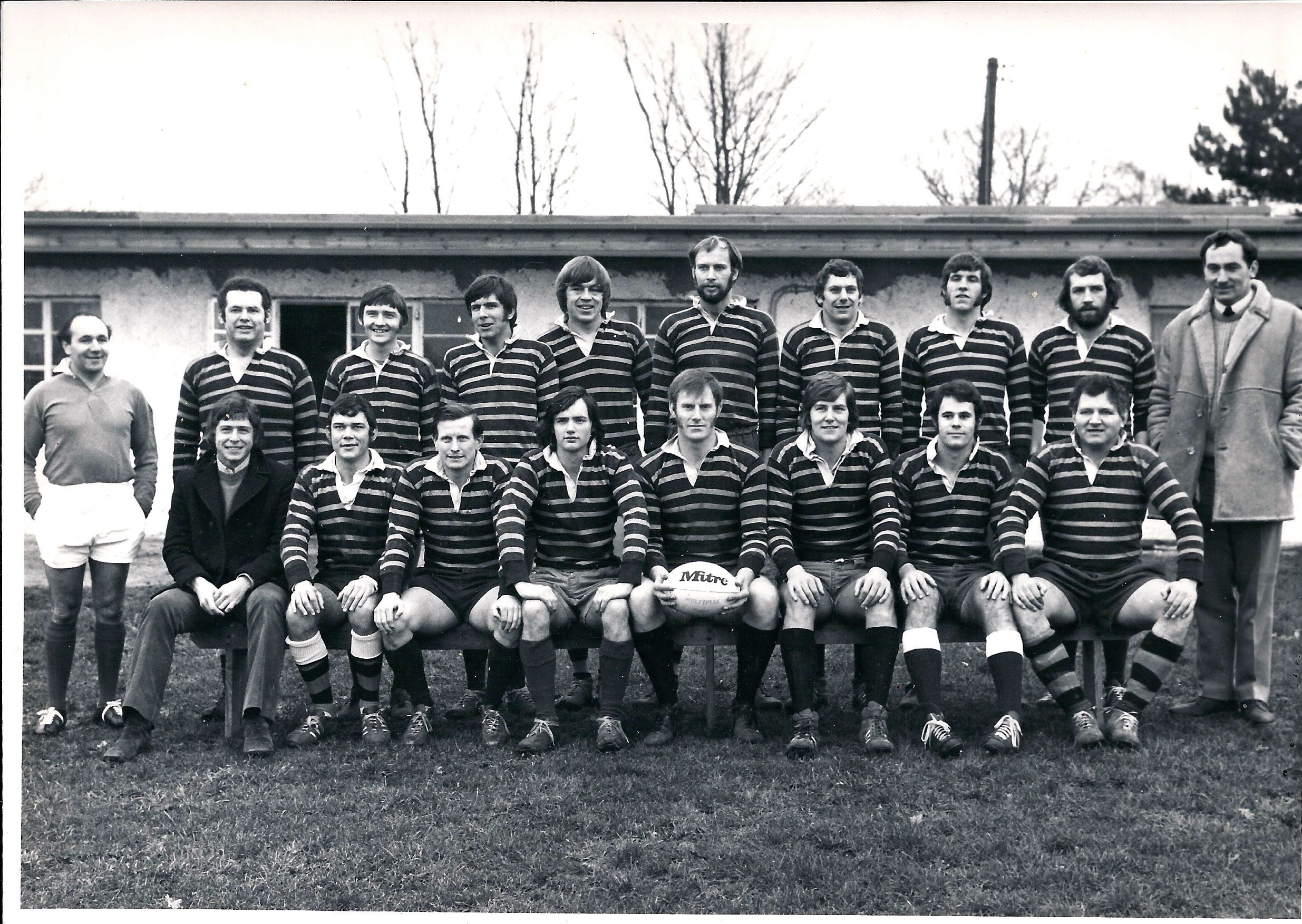 Having established themselves in the National structure the club suffered a temporary set back when they were relegated from National 2 South to National 3 in 2010/11.  The following season they bounced  back to Level 4 and made it an ambition to win a place in National Division One. This was achieved in the 1918/19 season when they defeated Chester in a play-off game in front of the largest crowd ever seen at Canterbury.

The step up proved difficult and relegation from Division One in 2020 coincided with the outbreak of the Covid 19 pandemic which was to bring rugby to a complete halt.  It was an unexpected end to a period in which the club had further broadened its reach by the introduction of a Wheechair rugby team, produced international players in the Touch Rugby game and made huge strides in strengthening its community engagement. 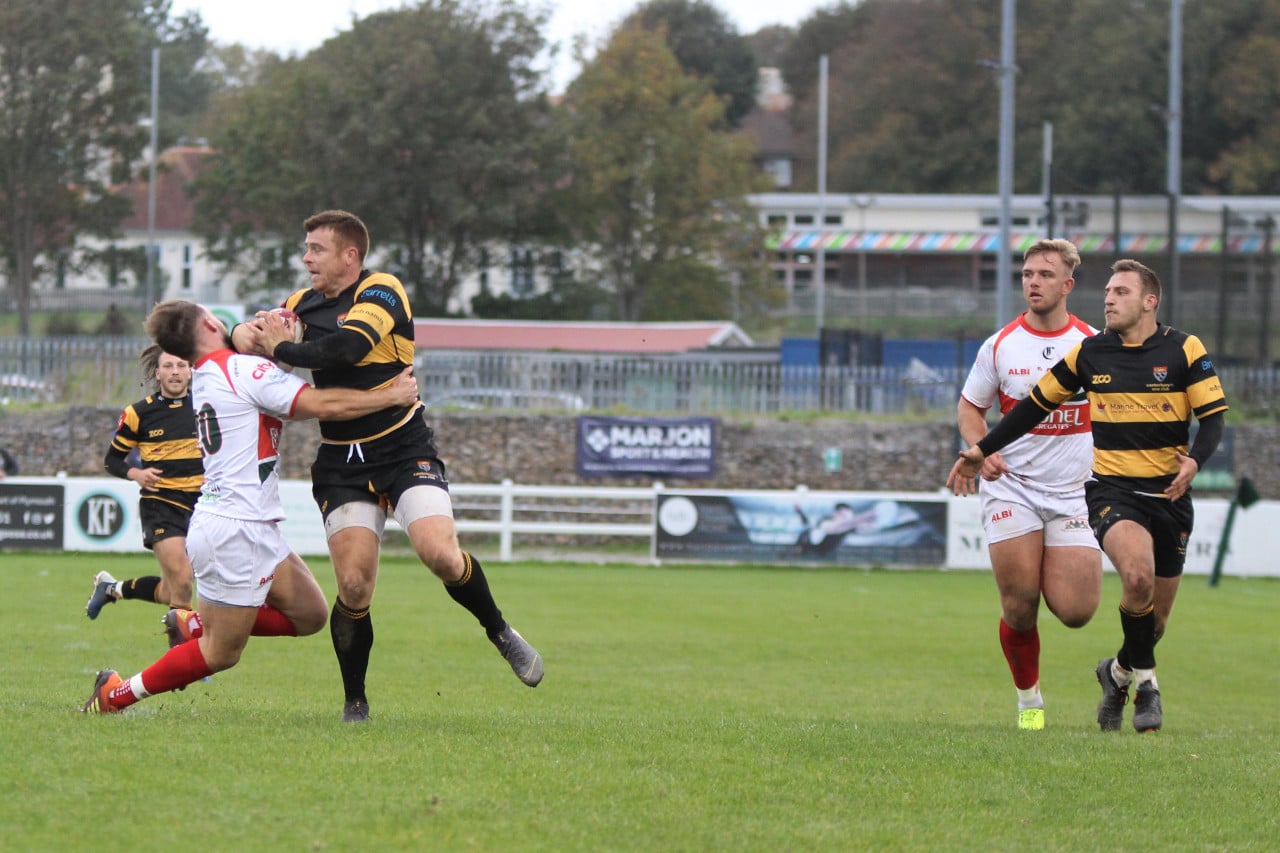