Canterbury gave the Christmas crowd just the present they wanted with this five try, bonus point victory. In a performance that shone through the heavy mist shrouding Merton Lane they tamed a lively Guernsey side with a dominant second half display.

There was quality as well a quantity from the city club as they ran in three tries after the interval, two of them scored while playing short handed with Kyan Braithwaite in the sin bin.

A confident back division made light work of that handicap, rewarding the turn over expertise of a combative pack handsomely. The foundations were laid in a shrewd first half display as Canterbury shrugged off a Guernsey try from wing Anthony Armstrong, converted by Dan Rice, and edged in front before the break. Frank Reynolds charge down try came after sustained pressure, Braithwaite converted, and in the last minute of the half they went ahead. The versatile Tristan King, this week starting as a flanker, made a decisive break. When the ball was recycled he was on the end of good handling to make the touchdown. A Canterbury weakness this season has been the failure to capitalise on half time leads; they did not make that mistake this time. Playing with real purpose they forged further ahead after 55 minutes. Replacements Will Waddington, making the break, and Ben Cooper combined for Cooper’s try which left Braithwaite a simple conversion. The moment that might have derailed them came with the yellow card as Guernsey hammered at the Canterbury line. That sparked a fierce response as a great turnover set the backs free, Dwayne Corcoran chipped over the last defender and Aiden Moss won the race for the touchdown.

Guernsey hit back quickly through fly half Owen Thomas, to narrow the gap to twelve points, but classy handling saw Corcoran kill their slim hopes as he skewered them for a fifth try. Consolation of sorts went to Guernsey with a last minute score from Number Eight Doug Horrocks, but the result was beyond doubt by that time. 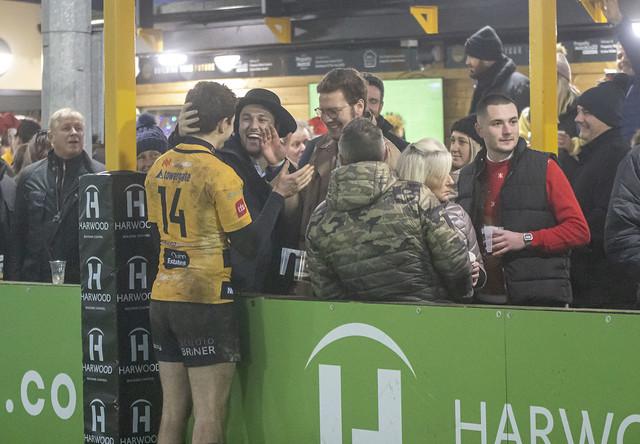