League leaders Redruth kept up their winning ways but not before they had been pushed all the way by a Canterbury side who earned a deserved bonus point with the last play of a rousing game.  The obstacles the city had to overcome before the match would have daunted most sides, but they threw themselves into the battle with spirit and enterprise.  Covid and injury troubles, with two of the squad failing fitness tests in the warm up, could have derailed them. Instead, an all-action contest might have gone either way until the Redruth pack found a measure of control in the final quarter.   Canterbury made the early running, attacking the wide channels, looking for the telling offload, and keeping Redruth’s defence busy.  They were unlucky to come away with only a ninth-minute try from Frank Morgan after prop Billy Young made a decisive line break.  An unkind bounce and a last-minute interception frustrated them and the visiting forwards sent out a warning as hooker Richard Brown was driven over for a try converted by Fraser Honey.  There was more trouble as the city side failed to claim the restart and Redruth used possession smartly to set up a second score. Conor Gilbert made the touchdowh and Honey converted.  Canterbury, however, refused to lie down, trusted in their attacking strategy and hit back when Aiden Moss twisted away from the defenders. The try was converted by Kyan Braithwaite but still left his side two points adrift at halftime.  It was his penalty goal that pushed Canterbury back in front eight minutes into the second half and the action, not all of it tidy, never slackened.  The telling scores came as the Redruth scrummagers forced penalties, found field position and showed why they have become difficult to beat.  Tries from scrum half Jack Oulton and replacement forward Richard Kevern, plus Honey’s conversion, gave them breathing space and they resisted a late Canterbury surge until the final minute.  The city side, for whom Braithwaite and wing Dwanye Corcoran were outstanding, hammered away at the line, Honey was shown a yellow card and
Braithwaite found a gap for the try and conversion that won the bonus point. 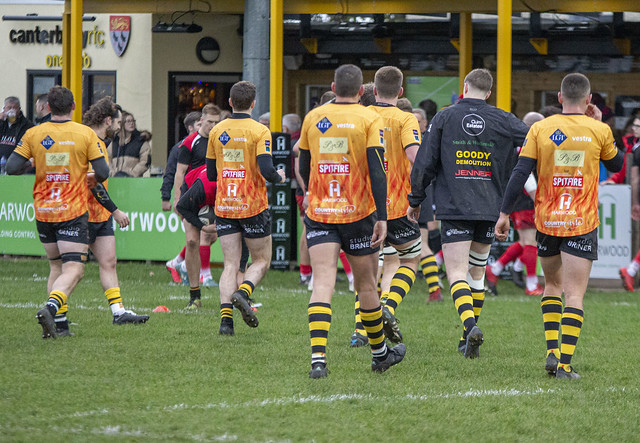