Canterbury’s mission to play free flowing rugby eventually paid handsome dividends against the league’s bottom side with centre Frankie Morgan, who scored three of his side’s eight tries, the main beneficiary. It was a welcome victory for the city club, only their fourth of the season, but for much of the first half they struggled to match their ambition with proper execution. They did ease to a 21-5 lead by half time but only after they had rid themselves of wasteful habits. Those included handing easy ball to Westcliff and failing to turn attacking flair into points. A promising opening saw an outside break from wing Guy Hilton set up Morgan’s first try and Kyan Braithwaite slot the first of his six conversions, but after that there was too much self-inflicted harm. Westcliff full back Greg Bannister, who scored all his side’s points, filched an interception try and it wasn’t until the final seven minutes of the half that Canterbury’s expansive game came together and was rewarded with further touchdowns by Braithwaite and Hilton. Westcliff’s limitations, however, were ripe for the picking and the longer the game went on the more they were exposed. The heavyweights in their pack were full of resistance and the occasional niggle but Canterbury’s all round pace and athleticism in the loose tested them to breaking point. Aiden Moss opened the second half scoring after four minutes, dented temporarily by Bannister’s second try as Westcliff took advantage of a friendly bounce and a loose ball. He then added a penalty goal to further close the gap but the city side’s all court game proved to be too much for the visitors tiring legs. Dwayne Corcoran had the easiest of overlaps as the match approached the last quarter and as Canterbury continued to move the ball at pace the gaps opened up. In the last twenty minutes Morgan, twice, and replacement Tom Williams put the finishing touches to some bold and inventive rugby. 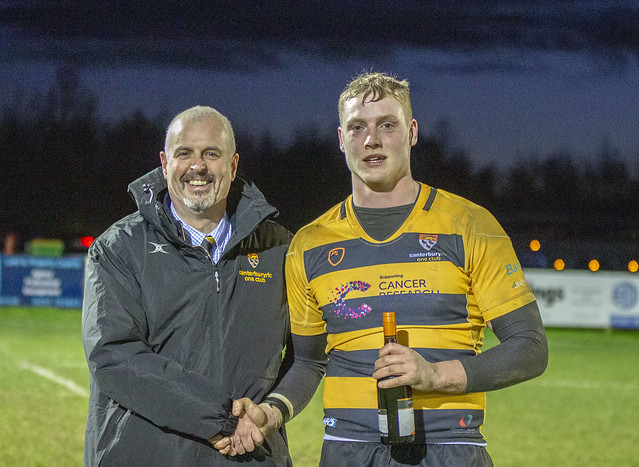 Photographs may be subject to copyright – Phillipa Hilton