A final home fixture of the season saw a strong victory for Canterbury’s ladies, confirming themselves as champions.

Upon kick off some untidy catch-attempts from Guernsey saw Canterbury gain the upper hand with an early turnover penalty which was taken as a tap-and-go, only to be shortly turned back over by Guernsey who also opted to tap the ball, a commonly chosen route throughout the game.

Some well executed offloading, paired with a huge line-break by Mimi Montgomery which left Guernsey disorganised landed the ball in the hands of Jess Pettafor, who needed only to sidestep a player to score the first try of the game in the fifth minute. With her attempt at conversion being charged down by a Guernsey player.

Shortly after kicking back off, Mimi Montgomery once again made herself the centre of attention with a swift interception and 30 metre dash before being reached by the opposition, however the defence had already been opened for Canterbury to run the ball almost to the Guernsey 22 – only to be stopped by a well timed tackle into touch.

All was relatively quiet from then, until the 13th minute when Montgomery once more made a dash through the defensive line from 15 metres out to score the second try of the match.

A well placed box kick by Charlotte Andrews bounced almost perfectly in Canterbury’s favour, with Guernsey misplaced to collect it out the sky, and chasing Ella Jenkins was quick to strike a tackle, and Rachael Austerberry’s keen eyes made sure it played out perfectly by spotting the ball and scooping it up as it came loose from the ruck: enabling yet another pitch-long run for the team as they offloaded from player to player, however a knock-on scuppered their hopes of furthering their lead.

A high tackle in the 20th minute on Alice Hayward saw the referee show a red card, leaving Guernsey with only 14 players with an hour of play remaining.

Canterbury seized upon this opportunity by kicking to touch, playing a classic catch-and-drive which took advantage of the lacking backline and allowed Anneka Willis to dive for the line – giving Canterbury a lead of three tries to nought.

Guernsey were not to be taken so easily, however, finding a straight shot at the uprights after a penalty was given in their favour, ensuring they would not head home empty handed.

A quick retaliation from Canterbury on the back of a scrum was once again spearheaded by Mimi Montgomery being unstoppable in her pace, scoring the fourth try for Canterbury, her second.

A clean cross-field kick by Olivia Haywood paired with some good footballing by Jess Pettafor allowed the fullback to score her second try of the match, making the score 25 – 3 where it would remain until half time, despite the best efforts of both sides to improve their position further.

The second half became quite different, Guernsey took the time to assess what their weaknesses were, as well as figuring out where Canterbury were struggling, and despite having a player deficit came back stronger.

The assessment showed through, with Canterbury being held in their 22 for ten minutes, until a penalty went Canterbury’s way and despite the kick not finding touch, Montgomery continued their form chasing after the ball as quick as can be and ensuring Guernsey could make only a few metres back.

Willis’ boot became something of a staple in the second half, constantly kicking just right – earning Canterbury a lineout just within the opposing half – and once again Montgomery got the ball and was off, running 40 metres to score herself a third try, and being dutifully converted by Anneka Willis.

A try and conversion for Guernsey demonstrated a determination to keep fighting, and a strength to compete despite the early red.

The game continued to be a smooth blend of fast backs and physical forwards, with a series of pick-and-go’s on the Guernsey line to eventually open a gap for Elizabeth Spruin to dart through and score a try just off centre from the posts.

The visiting side took the initiative after resuming play, kicking the ball along until a penalty in front of the try line was taken with a quick tap to the surprise of Canterbury, scoring a second try and converting with 14 minutes remaining to play.

Quick hands after a scrum had the ball reach Olivia Haywood who capitalised on the weakened back line of Guernsey, running across the field to score herself a try,

Guernsey’s last score came with six minutes remaining, again scoring from a short burst through the line to touch the ball down immediately afterwards.

The final scoring moment of the game came when Canterbury, unwilling to rest on their laurels, reused the power of Mimi Montgomery to score a ninth try for the side, fourth for Montgomery.

Match photographs may be subject to copyright – Jack Lloyd 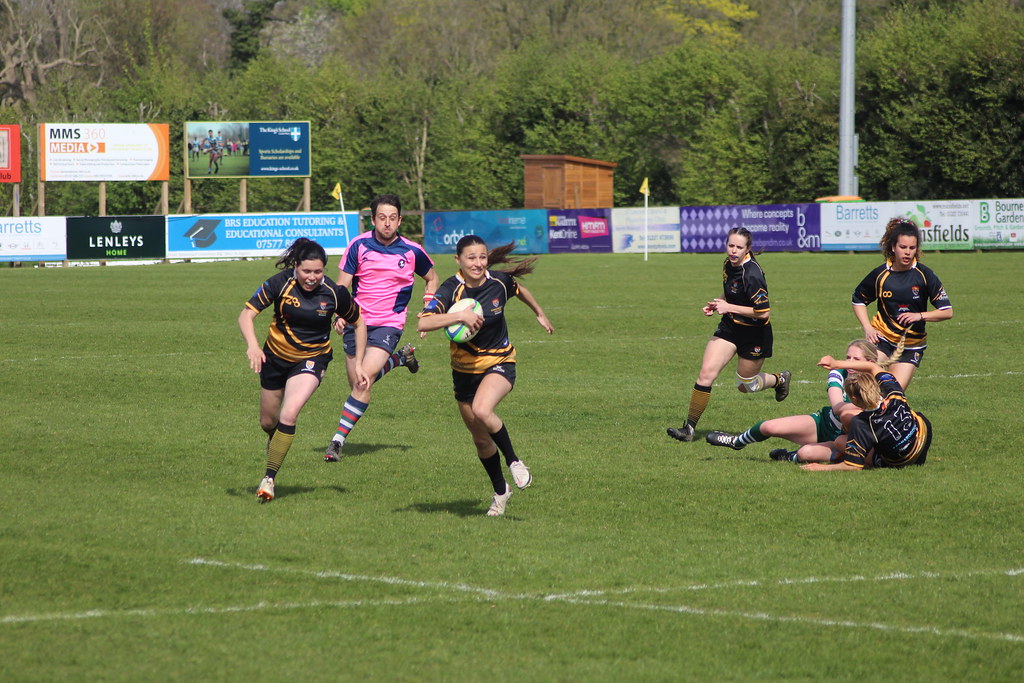