As the league leaders extended their winning run to seven games that decisive scoreline suggests that Esher had things pretty much their own way. But that was not the whole story of a match in which Canterbury had enough possession and territory to satisfy any side and must be kicking themselves for failing to turn it into points. Esher, on the other hand, gave them a lesson in taking their chances efficiently and with no little flair. Their Director of Rugby, former England flanker Peter Winterbottom, reckoned his side were fortunate to be fourteen points ahead at the end of a first half which Canterbury dominated for eighty percent of the time and he had a point, even if Canterbury didn’t. Injury problems meant they took the field with a reshaped pack but for all their honest work they lacked the accuracy and invention to dent a strong defence. Wherever their persistent attacks led them, at close quarters or in the wider areas, they either lost control or were penalised. When Esher finally broke out they showed how wasteful the city side had been by scoring twice in four minutes. Andy Hamilton finished off a driving maul and a Canterbury mistake in their own 22 area was punished by full back Tom Mitchell’s try. Sam Morley converted both touchdowns. There was much the same feel about the second half where Esher gave very little away and repeated the trick of claiming two tries only minutes apart. Harvey Scott’s was the best as he burst through from a set-piece move and curved outside the defence. That was in the 49th the minute and three minutes later lock Hugh Sloan crashed over, and Morley converted, to wrap up a bonus point for his side. A now over anxious Canterbury continued to probe and chase but could never discover a decisive finish or the efficiency their game badly needed. 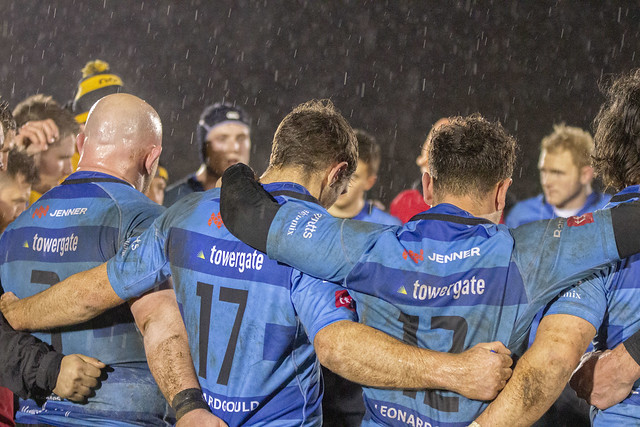 Photos may be subject to copyright – Phillipa Hilton