Canterbury Ladies took to the Footes Lane fields in Guernsey, through a tunnel of rapturous applause from the Canterbury Men and travelling supporters.

Starting at great pace the dynamic fullback, Jemma-Jo Linkins, ran in a fantastic solo try side stepping her way down the pitch. Swiftly converting it herself.

Canterbury built a steady lead as they put on an impressive display of aggressive defence and well-structured attacking play. Adding to an already strong debut season for the City side, Jess Pettafor added 5 points with an impressive display of pace down the right wing, following a line out steal from flanker Lucy Relf. Anneka Willis then scored after Liz Spruin turned a Guernsey ball over in defence. Linkins converted both setting up a 21-0 lead.

Guernsey opened their account with a penalty in front of the posts.

Player of the match, fly-half Rachel Austerberry, opened her account with a dominant break. Following a slick pick and go from the base of a centre field scrum by no. 8 Mimi Montgomery, a cheeky offload from scrum half Charlotte Andrews.

Dominant scrummaging, inspired by the formidable front row of Daniella Charles, Inger Philpott, and Tasha Weir, opened up the field for the backs to attack. Linkins ran in her second of the afternoon which she converted.

A lapse in discipline in front of the Canterbury posts saw Guernsey secure a further 3 points from the tee.

The half concluded with centre Olivia Haywood intercepting a ball and quickly popping in the tackle to fly-half Austerberry. In a stunning break she ripped through the heart of the Guernsey defence with a series of incredible fends. Linkins converting once more.

Starting the second half with a 38-6 lead Canterbury were keen to kick on and enjoy the final 40 minutes of the season.

Kate Rutherford added a further 5 points following an impressive rolling maul. But with the wind against her Linkins failed to convert.

The next try saw winger Alice Hayward turn the ball over with one of her aggressive tackles. Centre Tilly Chilton pounced on the ball then popped to Pettafor who ran in the try.

Forward of the match Philpott made a bust through the centre and offloaded to Austerberry. She accelerated away from the tiring Guernsey players to secure her first hat trick in the amber and black jersey.

Guernsey never gave up the fight and their fly half scored out on the wing following and swift series of pick-and-go plays.

With the minutes slipping away Canterbury fought back from the kick off. Impact substitutes: Alexis Scarpulla, Chloe Oakley, Lauren Windsor, Amber Waitimas and Octavia Andall bought much needed energy into the attack.

Captain Andrews took advantage of a penalty and put Guernsey on the back foot. With the forwards storming up the centre of the pitch. Veteran member of the team Claire Bernthal made a break round the fringes of a ruck. A slick offload to flanker Alice Crabb, who came sprinting through at pace to score a final try of the season which Linkins converted.

The squad undoubtedly put on a fantastic display of passionate, energetic, attacking rugby which demonstrated to all watching why they ladies were crowned league champions. 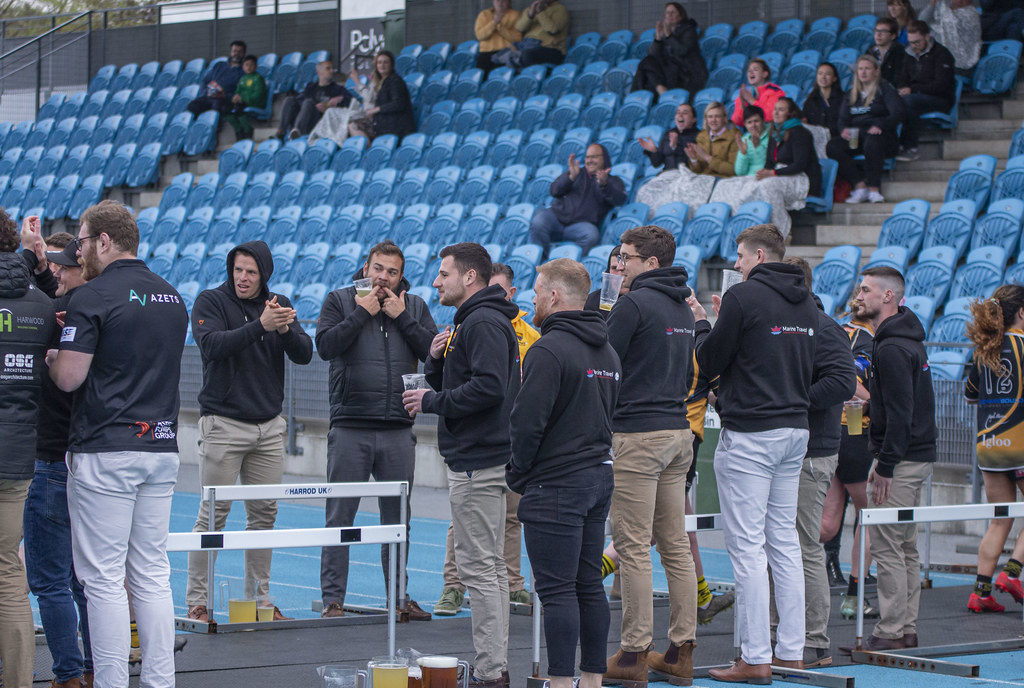